​​Who We Are
The Obedience Training Club of Chugiak was founded in 1966, and is sanctioned by the American Kennel Club.  One of our primary goals is to provide the Chugiak/Eagle River community with education about responsible dog ownership and obedience instruction. We offer three sessions of classes for the public which begin in September, January, and March. Club members also have practice time on the CBA training field on Wednesdays and Fridays during summer months. OTCC holds multiple AKC sanctioned obedience, rally, and agility trials each year at the CBA field. OTCC is an active club which depends on its members participation and support!​​​ 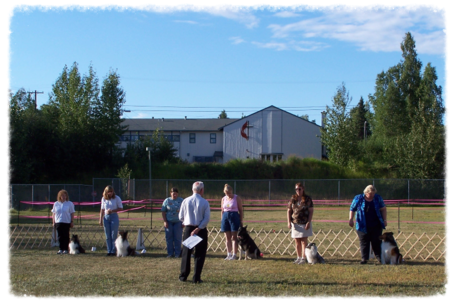 Membership
OTCC welcomes new members! There are several forms of Club membership. Regular Club members receive many benefits including: the ability to vote, hold office, reduced training  and  class  fees,  and  the  ability  to  use  club equipment and facilities.  New members must have two sponsors and attend two Club meetings before their membership is voted on. To start the membership process, join us for  our General Membership Meeting held upstairs in the CBA building at 7:00 PM on the second Monday of each month.